RPGs as a medium allow us, the players, to reinsert and reconfigure […] to suit the concerns that are most relevant to our lives.

In this week’s feature we meet game designer Hamish Cameron (he/him). Hamish publishes games through Ardens Ludere (www.ardens.org) and joins us from Portland, ME.

His most acclaimed work, The Sprawl, explores cyberpunk roleplaying through the perspectives of expendable operatives—mere “assets” of vast multinational corps—who work in the criminal underground, live outside the law, and do the things that cannot be seen to be done.

So have yourself another stiff drink punk, because from here on in, we’re hitting the ICE. No more chances, no jacking out. Get ready to run—

The Sprawl is a game with a tight mission-based structure. Why did you decide to choose this over a more traditional free-play approach? 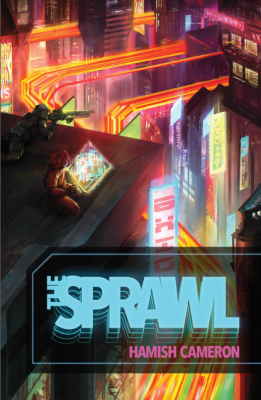 Hamish: One of my major design goals is to make games that don’t require much prep. I don’t have a lot of time to spend over the “lonely fun” aspect of GMing; I want games that I can basically think about on the drive/flight/bus ride to the gaming table and that help me create the experience I want at the table itself.

I find that having a high degree of structure that encodes the genre helps keep the game on track, on tone, in genre and saves a lot of preparatory energy. This is definitely the case with The Sprawl, and it’s also the case with Dinosaur Princesses, Kratophagia, and my as-yet-unamed spy game.

What are some of the best missions you’ve seen operatives succeed or fail at in The Sprawl?

Hamish: I don’t tend to remember the success and failure of missions. What sticks in my mind are the dramatic action sequences and dramatic betrayals: the gunfight in a speeding space elevator car accidentally destroying the data-courier’s headware that they were supposed to recover, the helicopter spinning out of control against the windows of a high rise while the tech hangs on for dear life, the corporate sniper framing the team by shooting their employer in a darkened parking garage.

For me, it’s definitely the journey that sticks in my mind rather than the destination.

One of the things that is sometimes said about the Cyberpunk genre, especially on the back of recent major blockbuster movies, TV shows and video game releases is that the aesthetics of the genre have prevailed over any meaning; that it is a genre being stripped of any political power it once had. How do you think The Sprawl relates to this?

Hamish: Hollywood (et al.) does what Hollywood does. They take historical material, themes and genres, strip them for parts, and repackage the aesthetic as an easily consumable product. Cyberpunk is no different than any other genre in that way. The best examples of any genre still have political, social and personal resonance, but the process generates a lot of filler as well.

That said, if the genre repackaging is well done, even the filler has cultural meaning and usually still retains political resonance for those who pay close attention.

RPGs are unique in that the intent of the creator is to allow the people who consume them to apply their own creativity and their own social and political concerns to the table. You can do this with other media—think of fanfic or vidding or mashups—but there’s a purity about the way that RPGs enable and in fact rely on remix culture.

If cyberpunk as a genre is stripped of political power (and I don’t think it is—the world is cyberpunk as fuck right now, the genre is extremely relevant) then RPGs as a medium allow us, the players, to reinsert and reconfigure that political power to suit the concerns that are most relevant to our lives. 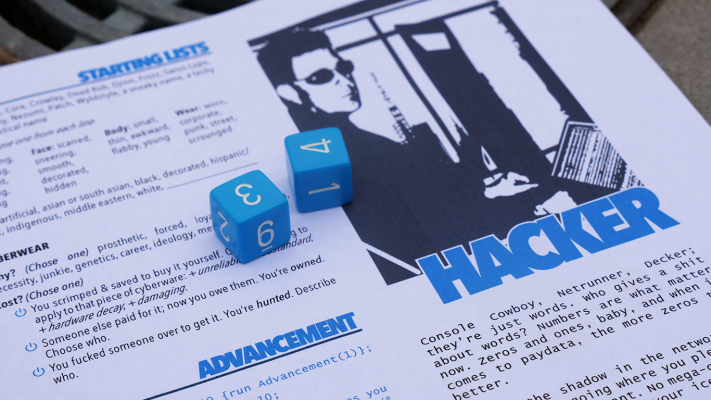 You mentioned your game, Dinosaur Princesses, earlier. For those not in the know, this is an extremely adorable game of being dinosaurs who are princesses—who work together to solve problems and kick butt! To me, it seems that writing a child-friendly game for all ages would be more difficult than one aimed at adults. What’s your secret?

Hamish: I think a lot about genre and audience. It’s central to my day job as a historian and its important to the way I write games.

What singular issue is important to you right now that you want us to leave here thinking about?